At 2021 milligrams per serving Ester C maximizes the immune response to viruses and infections. The studied benefits are numerous to improved health and well being.

Dr Frederick Klenner, 1936, believed in the healing power of nature, but believed that natural remedies could enhance that power and were safer and usually more effective than drugs. This century’s most highly decorated scientist, Linus Pauling, after 20 years of studying vitamin C, estimated that the average number of healthy years and lifespan for people would increase by 25 years if everyone would take the optimum amount of vitamin C (between 2.3 and 10 grams a day).

At 2021 milligrams per serving Ester C maximizes the immune response to viruses and infections. Vitamin C benefits include: 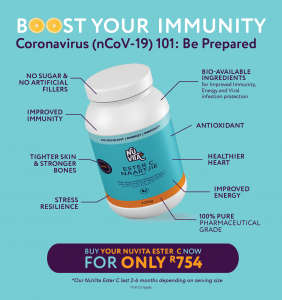 Vitamin C is a powerful antioxidant in the aqueous phase of the body. In this process it is converted into the inactive and pro-oxidant form which no longer has antioxidant properties. In NuVita Ester C, Ascorbic Acid is therefore combined with bioflavonoids which serve to regenerate the active form.

The water soluble form of vitamin C is further combined with the fat soluble form L-ascorbyl palmitate. In this manner, vitamin C activity in both the lipid and aqueous phases of the body is ensured. The buffered form prevents over acidification of the urine thus also minimizing the risk of kidney stones.

The inability of man to manufacture his own ascorbic acid, due to genetic fault, has been called “hypoascorbemia”. The use of Megascorbic levels of ascorbic acid in the prevention and treatment of viral infections is a practical application of the principles of orthomolecular medicine.

How Does Vitamin C Work

In mega-dose amounts such as 6 -150 grams, orally or intravenously, for certain pathological conditions, if allowed to run in rapidly it acts as a “flash oxidizer” and may correct the condition in minutes.

Dr. Klenner, one of the first masterminds in experimenting with vitamin C was the first to successfully use high-dose vitamin C in viral diseases, including polio. He went on to explain that “After vitamin C has entered cells infected by viruses, vitamin C “proceeds to take up the protein coats being manufactured by the virus nucleic acid, thus preventing the assembly of new virus units.”  Some infected cells expand, rupture, and die, but there are no virus particles available to enter and infect new cells. If a virus has invaded a cell, the vitamin C contributes to its breakdown. Dr Klenner knew that the virus was floating about in the blood stream and that large doses of vitamin C would destroy the virus before it got to the nervous system.

The Miracle Stories and Studies Conducted on Vitamin C

There are over 550,000 PUBMED STUDIES documenting the impact Vitamin C has on just about every system in the body. Examples include:

“A 22 year old male with chills and fever and a diagnosis of viral hepatitis. His roommate had been admitted the day before. Fifteen grams of sodium ascorbate was given intravenously every twelve hours for three days, then once daily for six days. Sodium ascorbate was swallowed at five grams every four hours (135 grams intravenously, and 180 grams orally). No diarrhea appeared with these doses. He was sent home on the sixth day with no fever and no bile in the urine. Soon he was back to work. His roommate with just bed rest was in the hospital for 26 days!”

Dr. Klenner successfully treated many other viral illnesses—including herpes simplex, herpes zoster, measles, mumps, mononucleosis, and chicken pox—always with high-dose vitamin C, and often in conjunction with other vitamins and nutrients. He treated his own daughter’s chicken pox, and gave us this case report which pointed out that injected vitamin C is often more effective than vitamin C taken orally.

Dr. Klenner reported successful treatment of serious cases of measles: “A ten month old baby had the high fever, watery nose, dry cough, the red eyes, and the Koplik spots that gave the disease away: hard measles.” He gave 1000 milligram injections of vitamin C every four hours. After twelve hours the temperature had fallen to 97.5°; the cough had stopped and the redness of the membranes had cleared. Just to see if this improvement happened to be the natural course of the disease, the injected vitamin C was stopped for eight hours. The fever rose to 103.4°. The vitamin C injections were resumed and the fever dropped in a few hours to 99°. 1000 mg was given every four hours; no rash developed.

There’s just not room to mention all the other poisonings, toxicities, and inflammatory conditions successfully treated by Dr. Klenner with high doses of injectable vitamin C. Another medical doctor shares his own experience with intravenous vitamin C treatment of food poisoning. It started at 9 AM with severe nausea, vomiting, and repeated diarrhea. His wife drove him to hospital; shortly before 10 AM a 50 gram IV was started. It finished “dripping in” by 10:40; by 11:30 all symptoms—no, not kidding—all symptoms were gone.

The Complete List of Conditions Treated with Vitamin C